Giveaway and Interview with T.Rae Mitchell, author of Fate’s Fables

This time I am really excited to present you with an amazing interview with T. Rae Mitchell, author of Fate’s Fables. She has been really kind and not only accepted to answer all of my curiosities but also offered to organise a giveaway for all of you!! :] How awesome is that?

1. Hi T. Rae! Thank you for accepting this interview! I am sure that my readers are really excited and would like to know more about you. How about sharing with us some facts about yourself?
T: I’ve always been artistically inclined. I can’t remember a time when I wasn’t drawing, painting or crafting. In fact, my leaning towards art was so strong I found most other subjects in school such a snore that my old report cards contain notes of how I daydreamed too much. I was really embarrassed about this until later in life when I found out daydreaming is a valuable form of creativity. And I now realize I come up with my best ideas when I’m daydreaming.
2. What is your book “Fate’s Fables” about? Tell us a few words about it.
T: On the surface, Fate’s Fables is a sort of Alice in Wonderland meets Grimm’s Fairy Tales story. But the real heart of the book is about how Fate’s greatest dreams and deepest desires manifest into nightmares because she’s careless with her Words of Making, (the power to create anything with the written word). As she confronts the deadly creatures and chilling characters within each fable, her survival ultimately depends upon her becoming clear about who she is and whether or not she can trust herself enough to harness her volatile creative power.

3. Will “Fate’s Journey” be a trilogy or you do not know yet?
T: When I first dreamed up the concept for Fate’s Fables, I thought it would be a stand-alone story, but I enjoyed living in Fate’s world so much I had to explore further. So I now have a trilogy planned with the second book titled Fate’s Keep, which is scheduled for release in 2014.
4. Any spoilers about the creation of the amazing cover? I really love it and I think that it fits the plot.
T: Funny you should ask this, because I was set on a completely different idea for the cover before we arrived at what you see now. I wanted a huge open book with letters lifting off the pages and swirling around Fate’s face like a flurry of snowflakes against a black backdrop. But after I made the wooden Book of Fables prop for the book trailer, it became obvious the beautiful lock against the intricately carved design on the book should be as prominent as Fate’s face. After all, the Book of Fables is as much a main character as she is.
5. Which is your dearest character(s) from this book and which one(s) don’t you like?
T: Of course, I absolutely love Fate. But I also love Finn and Sithias every bit as much. I truly enjoyed creating a connection between Fate and Finn that transcends all ordinary bounds. And her friendship with Sithias is what helps keep her strong through the darkest times. As for which character I don’t like, that’s an easy one, Old Mother Grim. She was the hardest for me to write because she goes against everything I am as a mother and all my protective instincts towards children.
6. What songs would you associate to your book?
T: Wonderland by The Mummers sums up Fate’s naïve love for everything make-believe and how she overlooks the fact that even in an imaginary reality there is pain and suffering.
Drift & Die by Puddle of Mudd conveys the raw emotions Finn feels when he’s forced to face the devastating truth of who he is.
Song Instead Of A Kiss by Alannah Myles works perfectly for Fate’s heartache when at a certain point in the book all she has left of Finn are her dreams of him playing the flute to make her forget him. 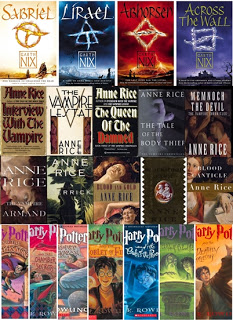 7. What are your favourite books/book series? You can make a top 5/10 if you want to.

T: It’s very rare that I read any book more than once, but Garth Nix’s Abhorsen trilogy is top of my list. I’ve read them all at least three times since they were published. Second to these are Anne Rice’s vampire series, Harry Potter of course, and Cassandra Clare’s The Mortal Instruments.
8. Which authors do you consider to have been your inspiration?
T: J.K. Rowling really sparked the magic in me, but Garth Nix’s writing stretched my imagination even farther.
9. Where do you usually write your works? Any favourite place?
T: I have my desk by the window with all my treasures around me for inspiration, such as my brass unicorn, my winged pig, steampunk clock, flowers, books, little birds and nests and uplifting sayings and surreal art to stir my imagination.
10. What country would you like your books to be popular in :D?
T: I’d be thrilled if much of Europe loved Fate’s Fables, because so much of my inspiration for my fables come from the folklore, fairy tales, myths and legends of the old country.
11. What do you think about Romania, the country I live in? Would you like to visit it one day?
T: I’ve never been to Romania, but the pictures I’ve seen are breathtaking, especially the castles, rural countryside and villages. They look like scenes right out of the fables of my book. Or better yet, I should say the scenery of Romania is at the root of my imagination and that of so many other writers. After all, vampires originated in Transylvania. And yes, I would love to visit Romania someday and drink up its rich, historic sites in person.
12. As an ending, you can say anything that comes to your mind to those who are reading! Anything you would like to share with them is welcome!

T: Since Fate’s a big fan of Peter Pan––as am I––I’ll leave everyone with a wonderful quote from J.M. Barrie I really like,“The moment you doubt whether you can fly, you cease forever to be able to do it.”
So always believe you can fly as high as you want to.
Simona: Thank you for taking the time to answer these questions! 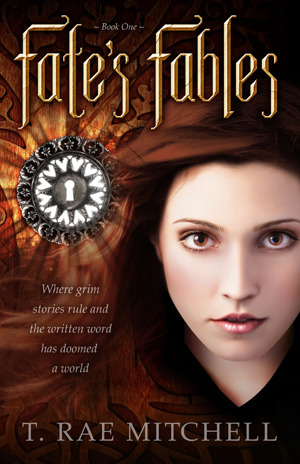 Synopsis:Seventeen-year-old Fate Floyd loves adventure –– as long as it’s enjoyed from the comfort of her couch. So it’s probably best she has no idea the future of the universe rests squarely on her shoulders.
Summoned by a desperate stranger’s spell in a last ditch effort to fix a colossal screw-up, Fate’s cast into a secret world bound by the ancient Book of Fables to retrieve a magical object powerful enough to set everything right. The only problem is, once she’s inside this savage wonderland, her only way out is to change the endings of the book’s eight dark fables into their mirror opposites. Fortunately, she doesn’t have to run this gauntlet alone, because she meets the mysteriously familiar Finn, who’s as inexplicably drawn to her as she is to him.
As they endure horrors beyond imagining, Fate awakens to powers she never knew she possessed and Finn questions his very existence, while an insidious darkness changes him in frightening ways. Ultimately, Fate must confront the faceless evil concealing itself behind the eyes of her one true love or remain trapped within the Book of Fables forever.
Excerpt from Fate’s Fables
From the second Fate spoke the fable aloud, the inked words lifted off the book’s ancient pages and a flurry of letters swirled around her. Then, like tiny pixels, the letters combined into a scene formed by her imagination, bursting into life all at once in a symphony of sights and sounds. The fable flowed through her. She became its voice without knowing the words, each sentence generating more and more of the living, breathing story. She was part of it, yet each time she reached out to touch the rich reality encircling her, the images rippled like a drop of water disturbing the reflective surface of a still pond. When at last the tale came to an end, the fantastical characters and enchanting scenery splintered into a storm of letters, the release so abrupt she thought she was falling from a frightening height.
Her knees hit something soft, moist and gritty. Dizzy and nauseated, she kept her eyes shut, the sound of the ocean still lingering in her mind. Though now she smelled the brine blowing off the waves.
There was something so wrong about that.
Finn touched her arm, his fingers squeezing lightly. “Are you all right?”
She focused on the warmth of his hand, her mind trying desperately to reject what felt like sand beneath her. “Please tell me we’re still in the bookstore,” she said, before turning her head in the direction of his voice, opening one eye and then the other.
“Uh, sorry. I’d venture to say, we’re far from it,” he said, his tone uncomfortable.
He looked pale. Was he as frightened as she was? She kept her eyes glued to his face, refusing to look elsewhere, willing the setting behind him to change back into the dim interior of the bookstore. The backdrop remained stubbornly bright and sunny as he stood and tilted his head to the sky.
“I’m guessing this is Elsina’s drifting island,” he said. “At least I think so. Those gulls look normal enough. Course they could’ve hitched a ride from some other port, but I’m surprised we’re not being greeted by her circus animals.”
Curiosity got the best of Fate. She glanced up at the seagulls circling overhead. When she saw they were ordinary, she wasn’t sure if she was relieved or disappointed they hadn’t been feathery freaks. But now she’d gone and looked. Giving up, she dropped her gaze to where the Book of Fables leaned against wet shale stretching high into towering black cliffs. She broke out in a rash of anxiety as she turned, her knees digging an arc in the sand as she stared open-mouthed at a breathtaking beach of white sand set within a sheltered cove. Beyond the breaking shoreline, the ocean stretched away from them into an endless, empty horizon.
She wasn’t in Kansas anymore.
Book Trailer:

About the Author: T. Rae Mitchell is an incurable fantasy junkie who spent much of her youth mesmerizing her younger sisters with stories sprung from her crazy imagination. Over the years, her craving for the rush of being transported to fantastical realms became more acute. So it was only a matter of time before her habit got the best of her. Grief stricken one day upon discovering that her supply had dried up (her favorite bookstore had closed), she decided she’d had enough. Abandoning her career as an award-winning graphic designer, she entered a fantasy world of her own making called Fate’s Fables. She lives in British Columbia with her husband and son who are helping her cope with her addiction. Fate’s Fables is her debut novel.
GIVEAWAY:
OPEN INTERNATIONALLY!
a Rafflecopter giveaway
Simona 2017-09-09T19:35:32+00:00