Review: House of Secrets by Chris Columbus and Ned Vizzini 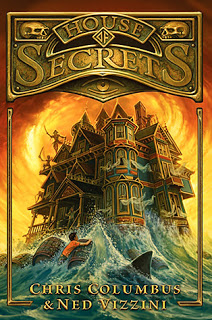 Synopsis:
The Walker kids had it all: loving parents, a big house in San Francisco, all the latest video games . . . but everything changed when their father lost his job as a result of an inexplicable transgression. Now the family is moving into Kristoff House, a mysterious place built nearly a century earlier by Denver Kristoff, a troubled writer with a penchant for the occult.
Suddenly the siblings find themselves launched on an epic journey into a mash-up world born of Kristoff’s dangerous imagination, to retrieve a dark book of untold power, uncover the Walker family’s secret history and save their parents . . . and maybe even the world.
Rating:3,5/5

This middle-graders book is a really interesting one, full of events and adventures!

The Walker family must move since an incident happens. One of the new places they check out is the Kristoff House which turns out to be not only amazing and cheap but also full of secrets and future adventures.
The three children of the family, Cordelia, Eleanor and Brendan, are not that happy about the move but they get captured in the crazy adventure that takes over their lives.
After they decide to move at the Kristoff House, the family has an encounter with a strange angel statue which dissapears like magic and also with a strange woman which is related to the Kristoff House.
The parents of the three children dissapear and this is when the series of adventures begins for the young ones.

The two authors created an exciting book in which the protagonists get to travel in places that leaves the reader with open mouth.
The secret that Cordelia discovers in one of the books from the library(yes, the K. House had a really wonderful library) somehow guides the three children in the spinning adventures in which they meet characters like pirates!
I really liked the conception of the Kristoff House which was located somewhere hanging on a cliff and had at the bottom some “earthquake barrels” that would save the house in case of an… earthquake! I also liked the interior of the house; the luxorious and elegant furniture, the amazing library..!
I found the book a little too long, making me to want to finish it faster but I guess that the series of adventures needed some space.

“A breakneck, jam-packed, roller-coaster of an adventure about the secret power of books, House of Secrets comes complete with three resourceful sibling heroes, a seriously creepy villainess, and barrel loads of fantasy and fear.”

I found the book interesting and I am sure that most middle graders will love it (and not only them)! The quote written on the book by J.K. Rowling gave me really high expectations for this book but it was not entirely like that. It was a nice book which would be mostly suited for those <17 years old. But it can be a good read for others also!
Simona H.2017-09-09T19:42:11+03:00